I am a member of a very nice Facebook Group. It is all about Ohenro and there are some truly lovely and interesting people there. They walk the path of Kukai, they compare notes, they give kind and helpful suggestions to fellow pilgrims, and they offer encouragements to others who struggle. You’d think that such a on-line Nirvana would be a place of continue self-affirmation, support, good vibes, and inspired support. It usually is, but there was an unhappy interaction surrounding a situation that should have been a no-brainer. Allow me a few lines here to let you in on it.

One of the members is a very kind, very thoughtful, and very generous bilingual woman who lives in Tokushima. She works as a volunteer to help clear and clean the Ohenro path in her area. She is involved with her community. She is also much like a patron saint to wayward foreigners who have no place to stay, or who get lost, or who don’t have a clue. Speaking and writing flawless English she sometimes sees foreign travellers resting in front of a local convenience store. If they are strapped for a place to stay she makes arrangements for them. She makes phone calls on their behalf and just helps out where she can. There is nothing she asks for from them. She just offers a helping hand to people who are on the road. She does not intrude. She just asks them how far they plan to continue on and if they have already arranged for a place to rest at night. If conditions are good, and if she can, she often helps out, even going so far to take them in her car. For people who walk the many miles on the Ohenro path to meet such a helpful, kind, and deeply resourceful person is like receiving manna from heaven.

Ok, so at any rate, this volunteer (did I mention she is a good person?) puts a notice up and voices her frustration that people are etching their names, and writing nonsense, into the moss covered walls around her community. I think that we can all, in good normal human sense, understand that these acts of brazen narcissism are tremendously stupid, and ugly.

Just take a look and see for yourself. 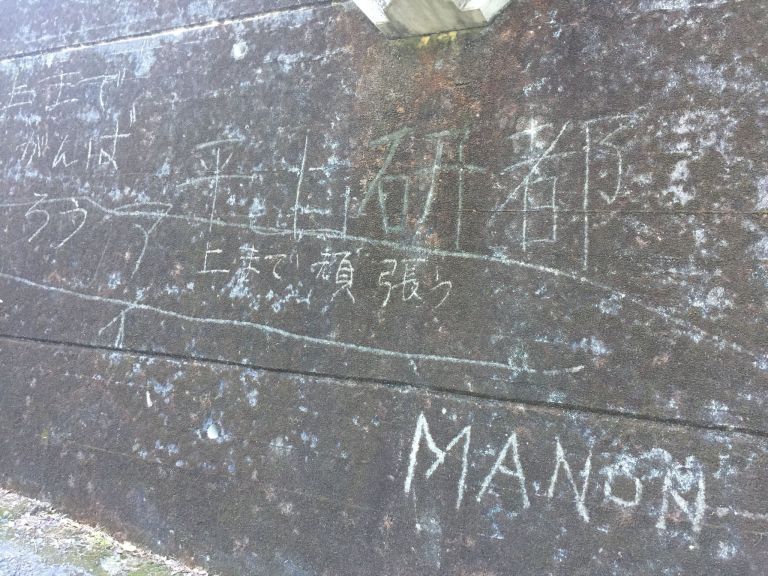 Some Western participants took her objection to be some kind of racially charged attack on Western ohenro who suffer so much (I guess more so than regular ohenro). Comments such as, “the walls are ugly anyway”, were equally ridiculous and childish. So, this kind soul was somewhat taken aback and feels very unappreciated for both her quiet service and support to foreign ohenro on the path, as well as her admonishments for these acts of vandalism. I thought that the whole discussion ran way out into left field and I sent a private message to the author telling her that I am grateful for the initial posting in the group, thankful as an expat here in Shikoku for the unblinking selfless support of non-Japanese speaking ohenro, and encouraged her to not let the childishness of others distract her from her message and request.

Let’s see if we can look at this particular issue in a different cultural context. Do you think it would be okay for you to go to any public accessible museum in France and write your name on that property? Do you think you can do that in any country you are visiting or vacationing in? Do you think it is okay to touch someone’s private property as you pass by and do visible damage to the plants attached to that person’s home? Even if you think that their wall is not so attractive?

Of course not. You know better. And if you don’t, shame on you. And yes, you are a dork.

The author of the initial post said that she knew the old man that lives in this place. He is elderly. He struggled long and hard to provide this home for his family. How should he feel about his home? He should be proud. He should be glad that he could, as a man and breadwinner, provide for his family despite trouble and hard times. And then some chowderheads come through and disrespect his home.

How should he feel? Should he apologize that his walls were not less unattractive so that others would not feel the need to vandalize them? Should he just take it like he “deserved it” or something?

Again, of course not. Yet, we still have some ohenro-wannabees who suffer from “privilege”. And yes, once again, they have their own apologists. It is tiresome to hear how they rattle on….

I know pretty much how I would feel if people walking by vandalized my home, just because they could. I think that I would be a volcanic magma spewing fount of pure rage and that my anger would burn like a thousand suns. I am working on personal growth, and managing anger, but that is how I would feel about that. How about you?

In discussing the contents of this blog with the original author, she would like me to pass on that her admonishments were not just about these particular walls that belong to a local resident, but also about any walls or places where people put up graffiti. No one wants to see it, and it is a very ugly and unhappy thing to see ANYWHERE along the ohenro route. The route is long, and it is beautiful, so it would be great if the entirety of the ohenro route could be treated properly and with the respect that it deserves.

I am bringing this particular issue to your eyes today not to shame you, or make you feel unworthy or culturally inferior, or any of that nonsense. I believe that if you are reading these lines you are likely not a moss-vandalizing person of any sort. Thanks for that. But I hope to let you in a little bit that there are people who have walked this path before you, and they behaved like idiots, and they damaged someone’s home, and they were not kind, and they did not pass through kindly.

As a long-term expat living here in Shikoku there are lots of other foreign guys running around in the bars, chasing women, throwing up, getting into fights, committing crimes, and doing all sorts of stupid. They dirty the pond, and they do influence how I am treated in a very oblique way. The do not show foreigners in a good light. Some of that is unfortunate and some of that is undeserved. I suppose I could lament about it, but there is only a few possible cures for hate and stupidity, and those are kindness and knowledge.

Travel well friends. Be kind. Be smart. Keep your hands off other people’s moss.

Thanks for reading this.

Order the Book on Amazon

Order the book on Amazon 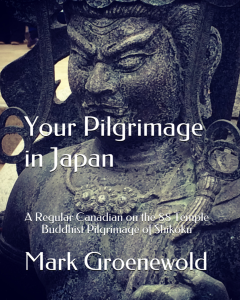